In Williams Lake, B.C., on July 22, 2013, protestors march to the opening of the federal review public hearing for Taseko Mines’ proposed New Prosperity copper-gold mine. Photo by Gwen Preston. 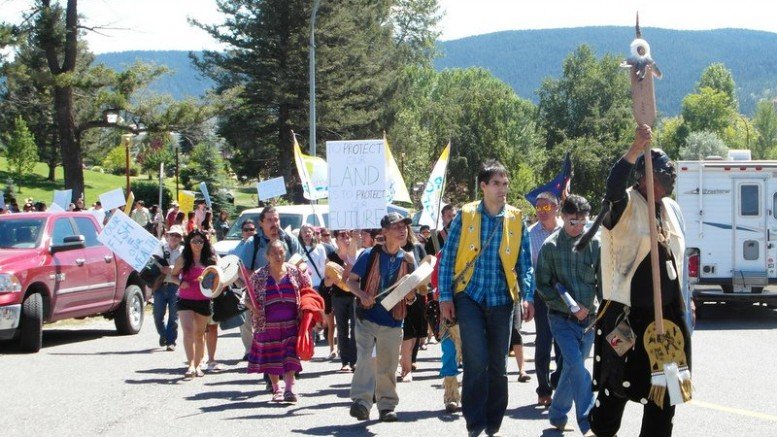 The Global Reporting Initiative is an ESG standard used by the vast majority of the world’s largest public companies to disclose their environmental, social and governance risks. But it only directly highlights Indigenous rights as material to a public company’s sustainability reporting when a community has sued or registered a complaint against the company.

It’s something a coalition of 86 First Nations in Canada believes is emblematic of a problem with ESG standards across the board.

ESG reporting standards were developed by and for finance and investment professionals without any input from Indigenous peoples and are failing to capture their rights and interests in companies’ ESG assessments, according to First Nations Major Projects Coalition, a collection of First Nations that want to have greater say over major development projects and their environmental impacts.

That absence means reporting standards are missing an important risk factor that could delay or even sink mining or energy projects, lead to protracted litigation and reputational risk, and eat into investors’ returns, said Mark Podlasly, the FNMPC’s director for economic policy and initiatives, in an interview with The Northern Miner. Companies may not be properly capturing opposition to their projects, or title rights that could complicate exploration and development work, he explained.

“The fact that they don’t do this becomes a real issue for risk mitigation,” said Podlasly. “What it comes down to is, have you addressed the risks of this project?”

Podlasly noted Indigenous concerns can fall under social factors like community or local engagement, or environmental factors such as land conservation, but said specific Indigenous concerns that could impact public companies around aboriginal title, or First Nations’ legal relationship to the Crown in Canada, are still not being taken into consideration.

The current state of play has led to companies that engage less with Indigenous peoples because their strong ESG rating gives them a false sense of security, he said.

“Companies cannot go into communities with an ESG approval or standard and say, ‘we’ve taken care of your interests, you don’t have to worry about it.’ That was happening, and is still happening,” he said. “What we’ve called for now is for Indigenous people to be included in those standards and ESG metrics going forward.”

The FNMPC and other Indigenous nations and organizations in Canada and the U.S., including First Peoples Worldwide, First Nation Financial Management Board, Canadian Council for Aboriginal Business and others, have started investigating how to make that happen.

It’s a question that’s taken on new urgency as governments and corporations gear up to transition to a net-zero world by 2050. The demand for copper, lithium, cobalt, nickel, rare earth elements and other critical minerals is already ramping up to support the growth of renewable power, electric vehicles and other low-carbon technology. And investors have money to spend: a group of banks, insurers and asset managers pledged US$130 trillion at the COP26 conference in November toward projects that combat climate change.

But much-needed future critical mineral operations could be rejected if they fail to address Indigenous communities’ needs, Podlasly said.

First Peoples Worldwide at the University of Colorado Boulder, an Indigenous-led organization focused on integrating Indigenous rights into business operations, developed the Indigenous Rights Risk Report. The report addressed Indigenous rights as social risks to oil, gas and mining companies, and is meant to serve as a tool to help private sector companies to measure social risks that often go underestimated. FPW has also created a free, prior and informed consent due diligence questionnaire for investors.

In New Zealand, the country is developing its own ESG reporting framework with extensive input from the Indigenous Maori, to ensure the country’s unique values are preserved and respected.
The FNMPC is planning to survey its membership about what would be important to them in a framework similar to New Zealand’s. Podlasly noted it’s a complex undertaking, given each First Nation will have different needs and perspectives based on their geography and unique realities, though he expects a key pillar will be economic inclusion. He said he sees the result potentially being a “filter,” a “sidecar” or possibly something akin to a rating.

But he admitted the FNMPC doesn’t know yet how it would be executed, and will have to work through that process.

Indigenizing ESG standards was the topic of a panel discussion at the FNMPC’s Vancouver conference on the role Indigenous peoples can play in the transition to net zero in late April.
Shelley Gilberg, the Canadian leader for ESG markets and consulting at PwC, said the expected consolidation of ESG standards into the newly created International Sustainability Standards Board’s (ISSB) global baseline sustainability disclosure standard provides an opportunity to include Indigenous perspectives, rights and traditional knowledge into “a smaller set of standards, rather than doing it twenty times.”

The ISSB, which has an office in Montreal, released a set of draft rules in late March for public comment. Investors and companies globally have long complained that the numerous sustainability frameworks complicate reporting on ESG metrics.

Geordie Hungerford, chief executive officer of the First Nations Financial Management Board, said he agrees there should be an international baseline, but noted each country’s Indigenous peoples have different realities. In Canada, First Nations have a “very special relationship with the Crown” and expectations of provincial and federal governments related to legislation to enact the UN Declaration of the Rights of Indigenous Peoples, and thus require a “made-in-Canada solution.”

Standards bodies themselves are paying attention to the conversation. Hungerford is part of Canada’s independent review committee on standard setting, which is looking to create a Canadian sustainability standards board that could liaise with the ISSB. Its consultation paper, released in December, has a section specifically highlighting the rights of Indigenous peoples.

Podlasly said the FNMPC has been in talks with SASB, which has been trying to improve its ability to address Indigenous rights in its current standards.

In an email to The Northern Miner, Harold Pauwels, director of standards at the GRI, said the standards body encourages all organizations to consider Indigenous peoples’ rights as a part of their sustainability reporting materiality assessment.

Pauwels said the GRI recently launched two sector standards for the coal and oil and gas industries, which both explicitly include land and resource rights and Indigenous peoples’ rights as likely material topics. “These Standards have additional recommended reporting, such as whether the company has been involved in the process of seeking free, prior and informed consent, as aligned with the UN Declaration on the Rights of Indigenous Peoples,” he said.

Last year, the GRI made a major revision to its universal standards to introduce a greater focus on human rights due diligence, and as a next stage plans to update all human rights-specific topic standards, including the specific “topic standard” related to Indigenous rights that requires disclosure of any complaints or lawsuits, called GRI 411.

“We look forward to engagement with groups that represent Indigenous peoples’ interests, such as the First Nations Major Projects Coalition, as part of this process,” Pauwels said.